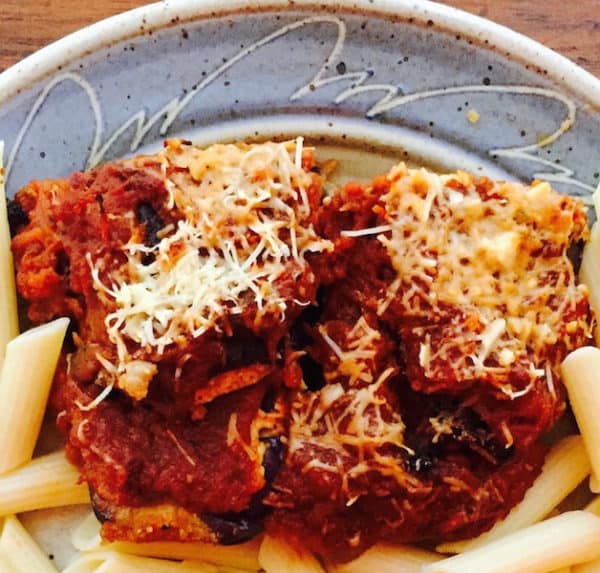 Hi, it’s Lois at Recipe Idea Shop, telling you about Don’s Eggplant Parmesan. Don made us some fabulous Eggplant Parmesan last night. It’s one of his favorite dishes to order in a restaurant. I seldom order it in a restaurant because most versions are so soggy in the middle and I don’t like the texture. But Don got it just right last night. We paired it with a good salad, some gluten free pasta and our wonderful Homemade Red Sauce.

I sliced the small eggplants in long strips for him and salted it to pull out the moisture. Don would have preferred that I peel the eggplant, but I like the extra fiber so I don’t generally peel it. He says the breading doesn’t stick to the skin, so you should peel it.

He used some gluten free Italian breadcrumbs and a beaten egg yolk for the coating. Then he fried it until crisp, layered it with shredded Pecorino Romano (Parmesan made from sheep’s milk), about three layers, with sauce over the second and third layers. The last step is to bake it for about 25 minutes until hot and bubbly. And it was worth the wait! Yum.

BUT FIRST, DID YOU GRAB YOUR FREE COOKBOOK? 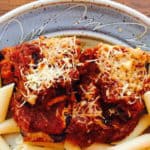 Note: Many of the links included throughout Recipe Idea Shop are affiliate links, which means if you follow them and you buy something, we will get a small commission. It doesn’t cost you a penny more, and you can still use your Amazon Prime (Shop Amazon – Give the Gift of Amazon Prime) account to buy. This posting includes affiliate links.

Don’s Eggplant Parmesan (gluten free) Nutrition Label. Each serving is about 1 cup (does not include pasta).