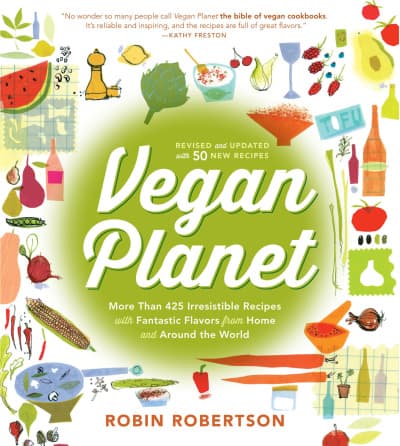 Hi. It's Lois in the kitchen at Recipe Idea Shop, talking about Robin Robertson's Vegan Planet cookbook, Robin Robertson is quickly becoming one of my favorite cookbook authors. I now have three of her fabulous vegetarian cookbooks.

Vegan Planet (The Harvard Common Press, 2014) is promoted as the Vegan Bible, and I can see why. It is filled with loads of tips that make being a vegetarian or vegan easy while also choosing nutritious combinations of ingredients to satisfy all your health needs. I used to think that being a vegan would be very difficult, but Robertson has shown me that it is possible to cook without animal products without having to spend long hours in the kitchen (not that I mind that, since I love to cook, but it's hard to do when you work full time!).

The revised and updated Vegan Planet includes 50 new recipes, more than 425 recipes total. The recipes are flavorful and easy to make without processed foods. I have tried two of the recipes so far (Walnut Crusted Artichoke Hearts and Tuscan White Bean and Fennel Stew with Orange and Rosemary) and both were delicious. I will continue making these recipes and try many more!

The only thing I don't like about Vegan Planet is that there are no photos of the recipes. Photos showing the amazing recipes with presentation ideas would make this cookbook indispensible. I'm working on making the recipes and taking my own photos. Watch for updates!

« Vinaigrettes and Other Dressings
Dairy and Gluten Free Chicken Stroganoff »