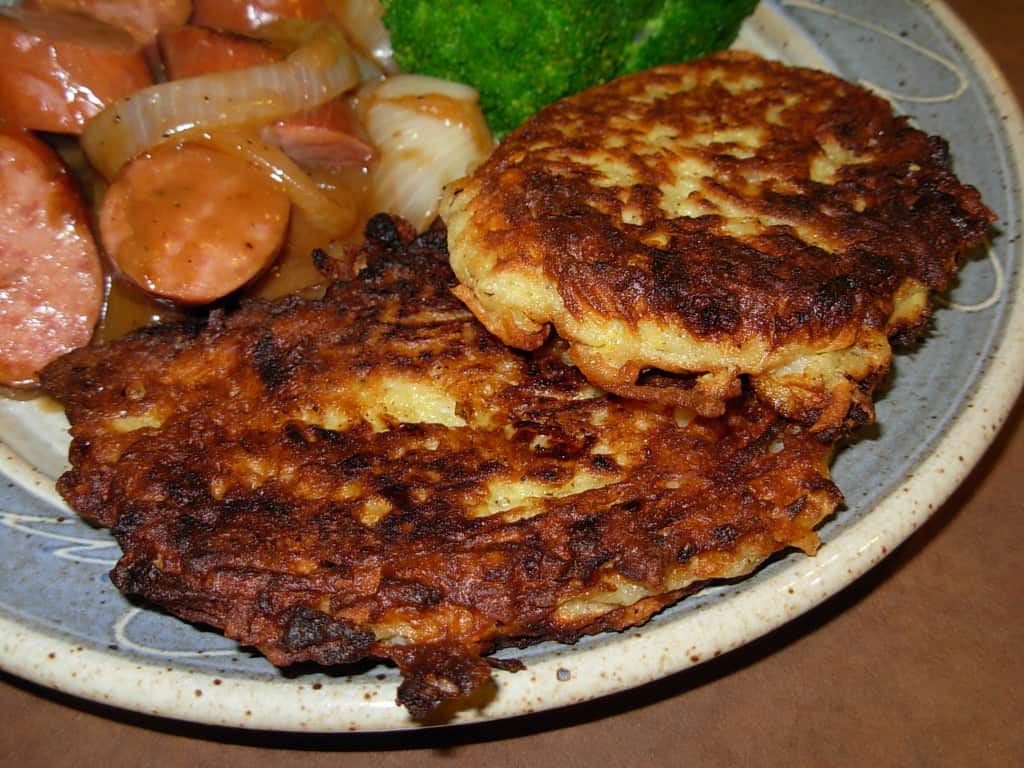 On Sunday Don and I decided to have some “Up Nort Der Hey” foods while watching the Packers play the Giants. I’m from Wisconsin so I’ll translate: “Up North There (Hey)”. The food was terrific, but the Packers blew their chance at the Superbowl. We were BUMMED. We had the Latkes with Polish Kielbasa in Onion Gravy. It was a delicious combination. This recipe came from Prep2eat.blogspot.com and, as usual, I modified it a little bit.

Peel the potatoes and onion and soak them in cold water in the refrigerator for at least an hour. Remove from water and coarsely shred both using a food processor.

Transfer the shredded potatoes and onions to a colander and press out some of the excess water. Dump the shredded mixture onto a couple layers of paper towel and squeeze out as much water as you can. Do this a couple of times so the mixture is not so wet.

Mix in the other ingredients. Heat the canola oil in a frying pan over medium-high heat. Form the potato mixture into sort of thin patties (like you would a hamburger). Do not crowd them in the pan as this will decrease the temperature and make it harder to cook them.

Fry the latkes in the oil until the “down” side begins to brown. Carefully turn them over to fry the other side. When both sides are evenly brown, remove the latkes from the pan and drain them on a paper towel. Serve with applesauce or sour cream. You can keep the latkes warm in a 275F degree oven for a few minutes if you are making a larger batch and need to “hold them over” for a bit while you fry the remaining latkes.