Hi. It's Lois at Recipe Idea Shop with a 3-in-1 recipe for you today. I made this Lentil Rice Stuffed Roasted Eggplant recipe and realized the stuffing (which I had left over because I only roasted two eggplants) would be excellent alone or with an egg on top. So delicious! Make it once and get three amazing meals. I especially liked it with an egg on top.

It looks complicated because there are six basic steps to the recipe, but some are done simultaneously:

Don went to the Harrisonburg Farmer's Market last Saturday and came home with four small eggplants. He loves eggplants. Ooops. We already had four eggplants from the previous week that I hadn't cooked. So we were definitely having eggplant for supper on Saturday. And Sunday. I made a Butternut Ratatouille (with eggplant, of course) on Sunday. I'll tell you about that next week.

Saturday night we had Lentil Rice Stuffed Roasted Eggplant, topped with toasted pine nuts. Pine nuts taste creamy and rich to me. I love them toasted atop casseroles (do people use that word anymore?) and salads. To roast the pine nuts, I spread them out in a single layer and broil them in my toaster oven. My Black & Decker toaster oven is so cool, because you can simply broil something the same way you make toast (but on broil), by turning the timer dial to the darkness you prefer. It makes it super simple.

If you don't have a toaster oven, you can "toast" the pine nuts in a dry skillet over medium heat for a few minutes. But you have to watch it like a hawk and periodically stir them so you don't go from uncooked to burned in about two seconds. Or you can broil them in your regular oven for a minute or two. That option is the hardest for this ADD girl. I tend to burn them every time because I get distracted. So I LOVE my toaster oven.

For this recipe, you roast the eggplant about 20 minutes while you are making the stuffing. The piece that takes the longest is cooking the brown rice (about 40 minutes). I've talked about roasting eggplant previously, but it's quite simple. Cut the stem and leaves off the eggplant and then cut it in half lengthwise. Slice a deep center cut lengthwise down the inside. Put about 2 tablespoons (or less) olive oil on a baking sheet and then place the eggplant, cut side down, on top. Move it around and turn it over to disperse the oil and be sure the eggplant is thoroughly coated inside and out. Roast at 425F degrees, cut side down, for about 20 minutes until the inside of the eggplant is soft and begins to brown. Remove it from the oven and set it aside until you are ready to stuff it. The cut you made earlier down the center will allow you to fill it easily with the stuffing. If you like Stuffed Eggplant, you might also like this recipe. 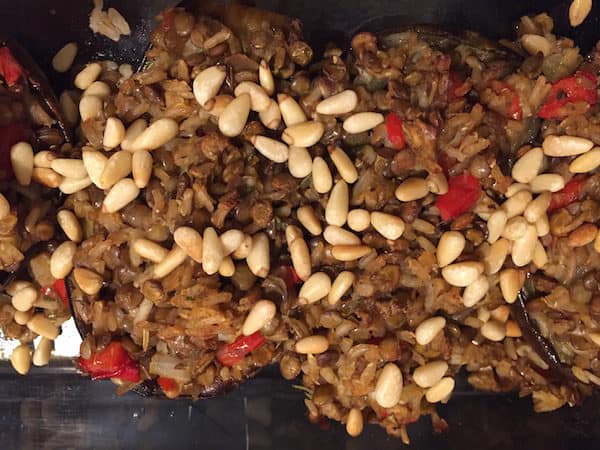 Really, it's easy. All you do is boil the green lentils until crisp tender (about 30 minutes total time), make the brown rice (40 minutes, and you can do this at the same time as the lentils are cooking and the eggplant is roasting), sauté the other veggies, and mix it all together before stuffing the eggplant and popping it in the oven for 15-20 minutes. 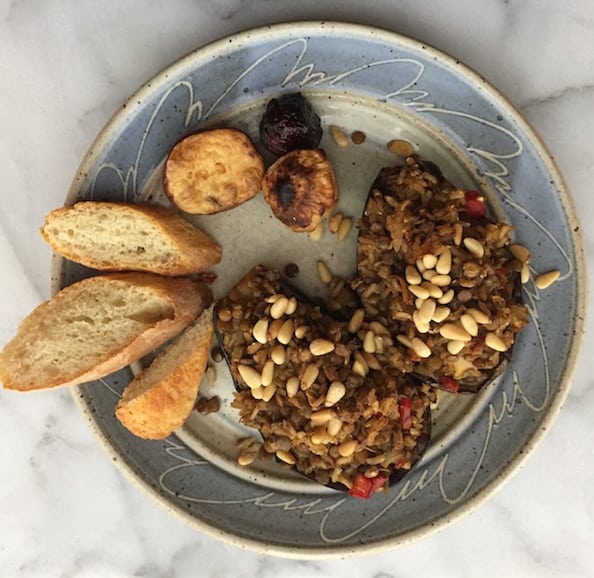 Really, it's not complicated. But it does take some time to make.

Don and I were only able to eat half an eggplant, so we had another meal of the Lentil Rice Stuffed Roasted Eggplant, plus extra stuffing to eat in other ways. Try the Lentil Rice stuffing alone, warmed up or cold. It is filling and tasty. With this recipe, you should have enough for about 8 servings of the Lentil-Rice mixture.

Warm Up the Stuffing

To add some color, try sautéing a little spinach or kale and serve the stuffing over it. You'll get more iron and Vitamin K that way. But really, when I eat this, I don't need anything else. This is a meal-in-one. For this option, I didn't include the pine nuts. But toast some more if you like them. 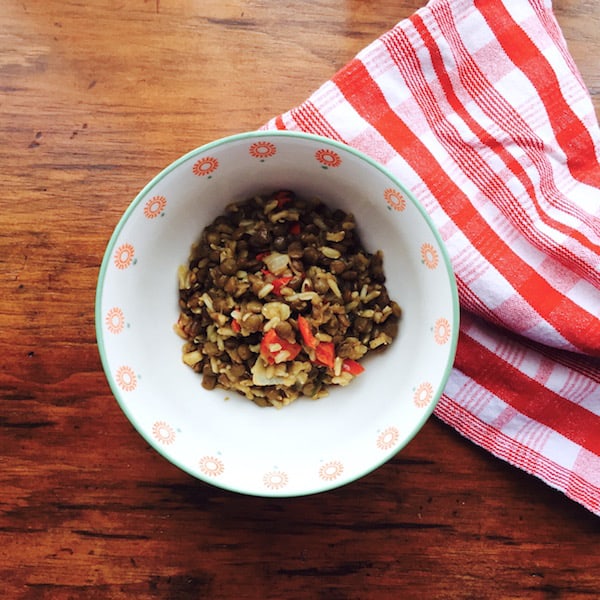 My favorite leftover version, however, was with fried egg on top. It was creamy and scrumptious! I warmed up the lentil-rice stuffing and topped it with a fried egg. What a super lunch bowl. More Vitamin E, too, which is good for the skin. And did I say this recipe not only gluten free, dairy free and soy free, it's vegan? Leave off the pine nuts and it's nut free, too. 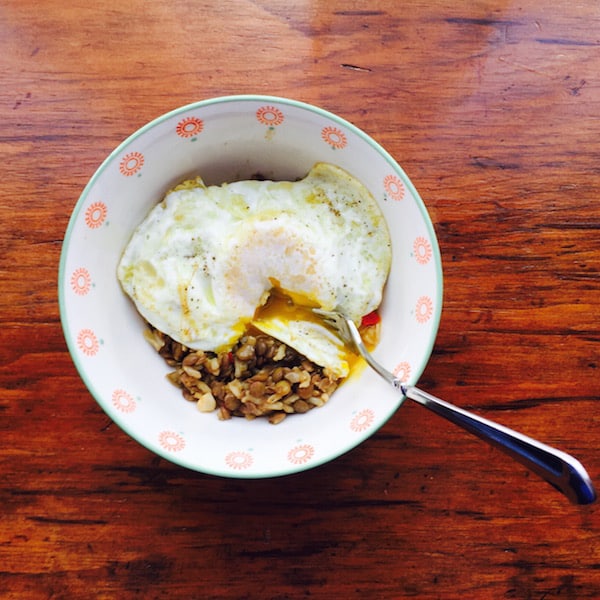 Lentil Rice Bowl with an Egg on Top. My fav!

When you try this recipe, be sure to comment on which way you liked it best! I know you're gonna love this.

Although it's a mult-step recipe, the tools are pretty simple. I used measuring cups and spoons, a knife and scissors (for the rosemary), a cutting board, pots and pans, a baking sheet, and my toaster oven. 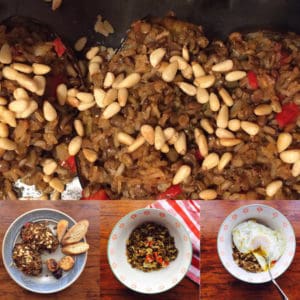