Gluten Free Three Layer Mint Brownies look beautiful on a plate of Christmas cookies, and they taste so darn good! They are rich and chocolatey. Since they are bar cookies, they are super easy to make.

It will be hard to eat just one. This brownie recipe is another of my family's favorite holiday œcookies recipes. Gluten Free Three Layer Mint Brownies are easy to make and very pretty when served alongside other cookies. They are rich and minty. I cut them into 2" squares when I serve them with other cookies on a tray, and a bit larger if it it the sole dessert.

I got the original Three Layer Mint Brownies recipe from a friend, Michelle Esser, in the 1980s, and I've been making it ever since. It is one of my daughter Erin's favorites. In fact, when she was in elementary school, she came home one day and told me that the teacher told her she must bring a treat the next day. Erin told me it had to be Three Layer Mint Brownies. After I made the brownies and took them to school, I found out her teacher said nothing of the sort! Erin just wanted the brownies.

Ooops! That Was Expensive!

I also sent these brownies to Erin for Christmas one year, along with several other cookies and chocolates, and her roommate just threw the package under the Christmas tree. Erin knew I was sending cookies, but her roommate didn't tell her the package had arrived. The dogs, however, had no problem figuring out that the package contained food. They ate everything in the box, eating about 5-8 pounds of various chocolates, necessitating two trips to the veterinarian (one for each dog), and costing about $1,000. Even though Erin no longer has any pets, I have learned to send packages to her office.

If you are not interested in making them gluten free, these can also be made with regular flour. See Three Layer Mint Brownies. You're gonna wanna eat these.

You will need measuring cups and spoons, an electric mixer, a double boiler or a microwaveable bowl, a cake pan or a jelly roll sheet (depending on how many you make), and some lovely dessert plates or serving plates. And you are definitely going to want to offset the sugar with caffeine. So get a terrific espresso machine. 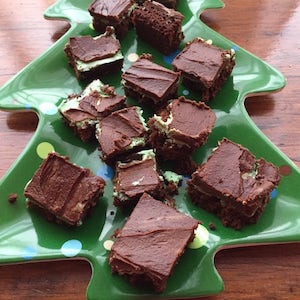 Note: Brownies must be refrigerated or they tend to melt.
Tried this recipe?Let us know how it was!