Onion Potato Soup with Dumpling Noodles is a terrific soup anytime. Just 30 minutes until you can eat. Great Saturday lunch. 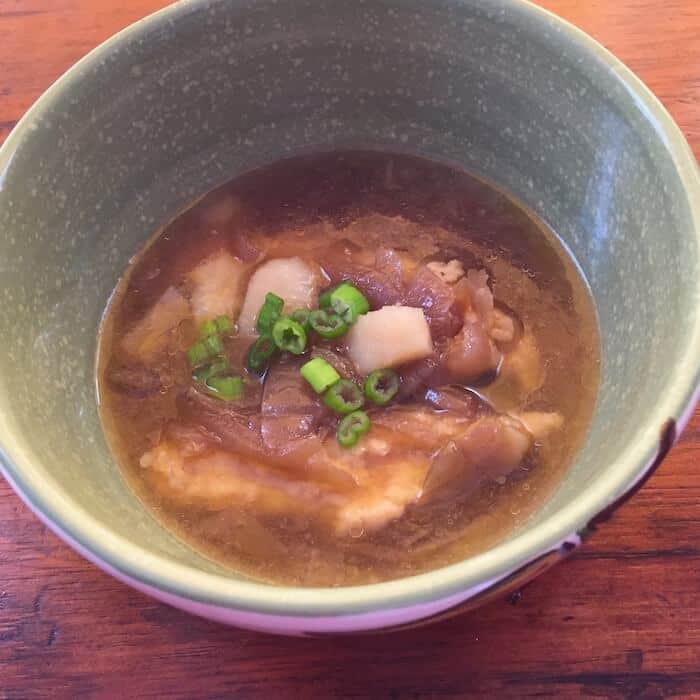 Onion Potato Soup with Dumpling Noodles Made With Caramelized Onions

Onion Potato Soup with Dumpling Noodles was well loved at our house.

Today I'm telling you about my favorite potato soup recipe, Onion Potato Soup with Dumpling Noodles. It's a lot like French Onion Soup with potatoes and dumplings added. 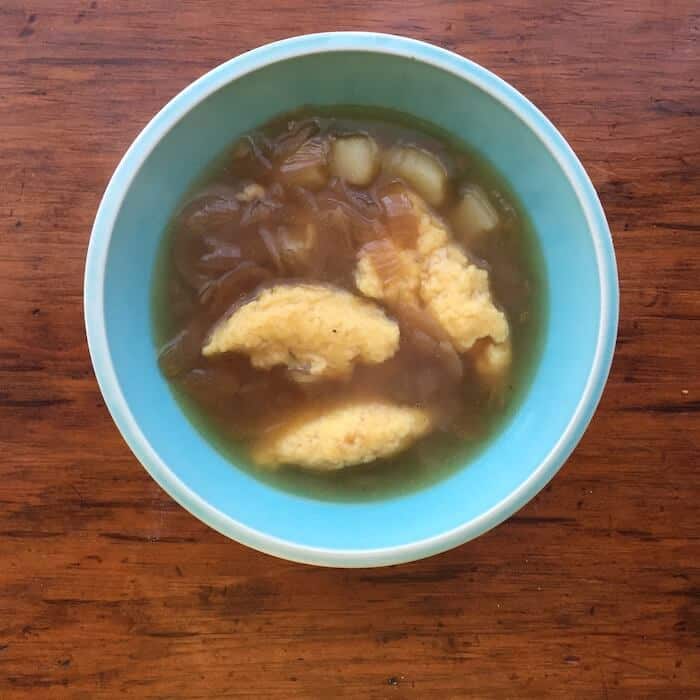 When I was a child, my mother often made an onion-based Onion Potato Soup with Noodles for lunch on Saturdays. She used Lipton Onion Soup Mix for her soup. I have changed it up to eliminate the prepackaged product and use real onions instead. We all loved her soup, especially the "noodles" (which I later learned are actually dumplings). The noodles are chewy, not fluffy, similar to a Hungarian dumpling. 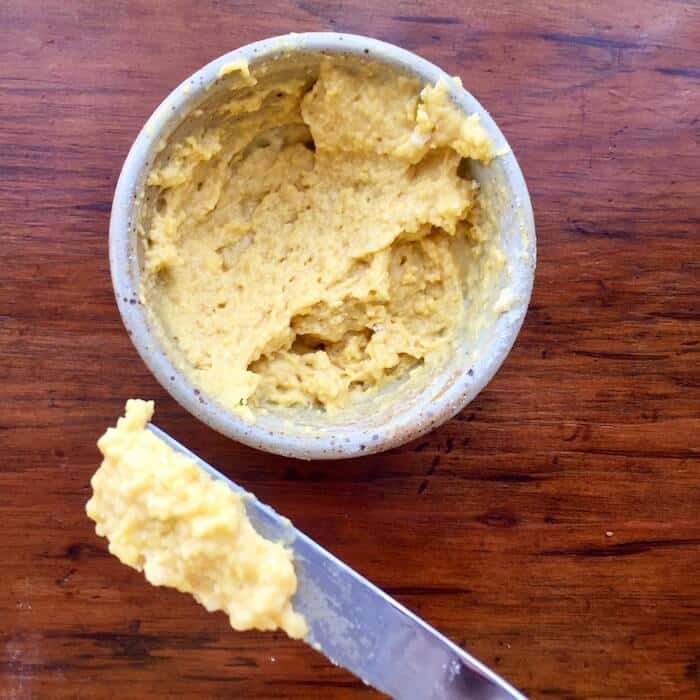 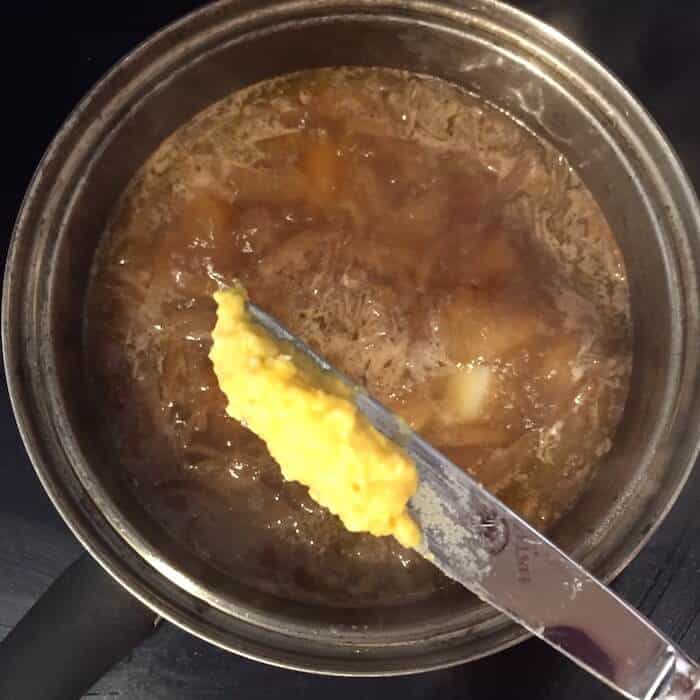 Scoop a little of the dumpling noodle batter on a knife. Put the knife in the batter and the noodle will slide off into the soup to cook.

When I made this Onion Potato Soup Recipe for my first husband, he called it "pepper soup"  because I put a lot of pepper in it. My current husband likes the soup, but doesn't like the noodles. The kids are split on whether they like the noodles, but they all like the soup. The noodles are my favorite part.

I made the soup this weekend and used Slow Cooker Caramelized Onions that I froze the last time I made them. The soup had such a robust depth of flavor.

For this recipe you need a paring knife or vegetable peeler, a chef's knife, cutting board, small mixing bowl, measuring cups and spoons and a Dutch oven or a good soup pot. While you're buying the knife and pot, get full sets of both, and buy the best you can afford. 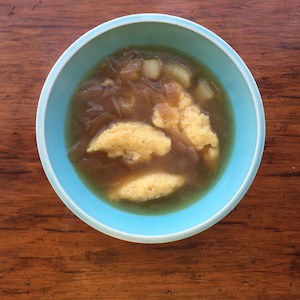 Taste the soup and adjust the seasoning as desired. I use about 1 teaspoon of salt and enough pepper so that when I take a soup spoon full of the broth, I have about 5 grains of pepper per spoonful. Since I just shake it in, I'm not sure how much pepper this really is. I'd say it's about ½ teaspoon.

Calories: 394kcal
Keyword potato soup, onion potato soup,
Tried this recipe?Let us know how it was!

Onion Potato Soup Recipe Nutrition Label. Each serving is about 2 cups of broth and 2 noodles. 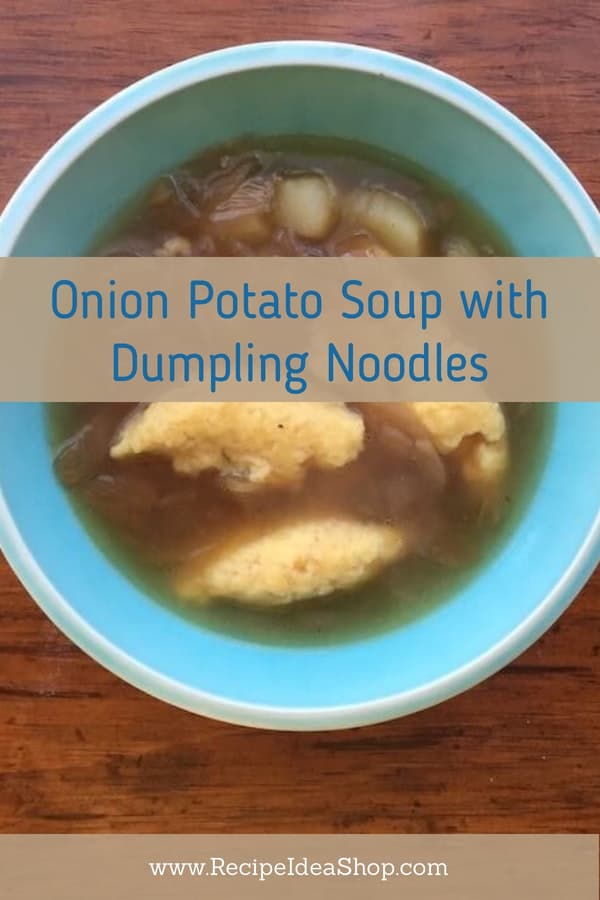