Grilled Spatchcocked Chicken is super delicious and easy, but it isn't a quick meal. It requires several hours of letting the chicken marinate in the refrigerator. The grilling part is pretty quick, though, compared to regular roasted chicken.  And the results are so scrumptious. There are partial step-by-step photos if you scroll down. 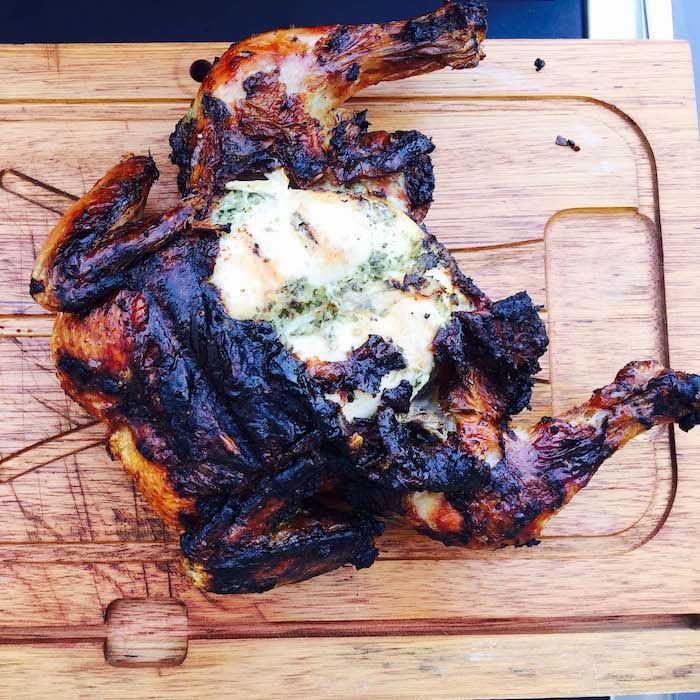 Whole Grilled Spatchcocked Chicken with delightfully crispy skin. It may look burned, but it is beautifully caramelized.

Grilled Spatchcocked Chicken, have you heard of spatchcocking? I hadn't until a couple years ago when I read about it in a magazine. You know how you think you have never heard of something and then all of a sudden, that thing is everywhere? That's what happened to me with spatchcocking.

During the pandemic, we didn't have our usual ham or lamb available and chose to cook chicken instead. I could eat this chicken every day! 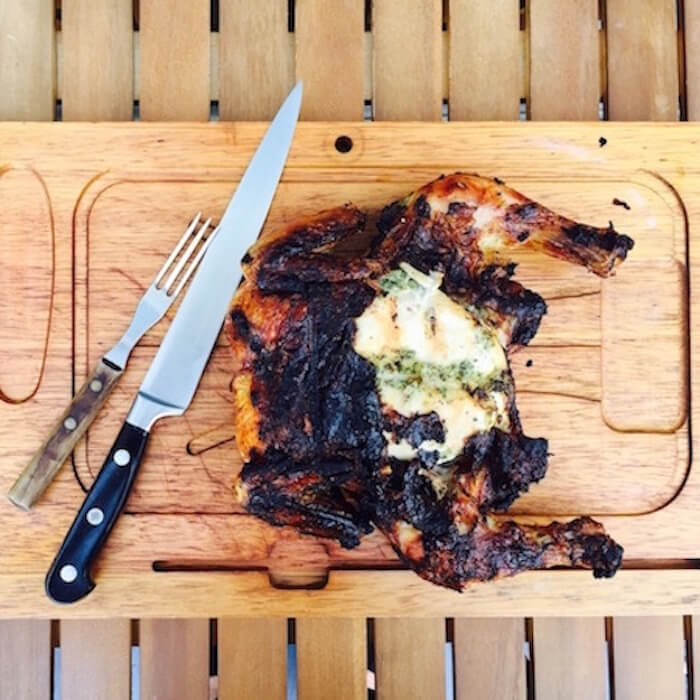 If you infuse the marinade under the skin and cook it until the skin is blackened, you will be happy, happy, happy.

I looked up the history of spatchcocking and it has been around since the 18th century. But in 2002 New York Times food "minimalist" Mark Bitman created a video about spatchcocked turkey and all of a sudden, the term was trending. His video is entertaining. He shows you exactly how to do it and then puts a big clock around his neck to show you the turkey will be done in 45 minutes. And it looks like it's about a 12-pound turkey.

When you make Grilled Spatchcocked Chicken, you cut the backbone out (save it for making broth) and flatten the bird to increase the cooking surface. I adapted Martha Stewart's recipe and the combination of onion, garlic, herbs, olive oil, and lemon in the rub made it super good. In the one shown below, I used olive oil, garlic, lemon juice, rosemary, thyme, and oregano. Oh my! It's good.

Watch the video above to see how to cut the backbone out. 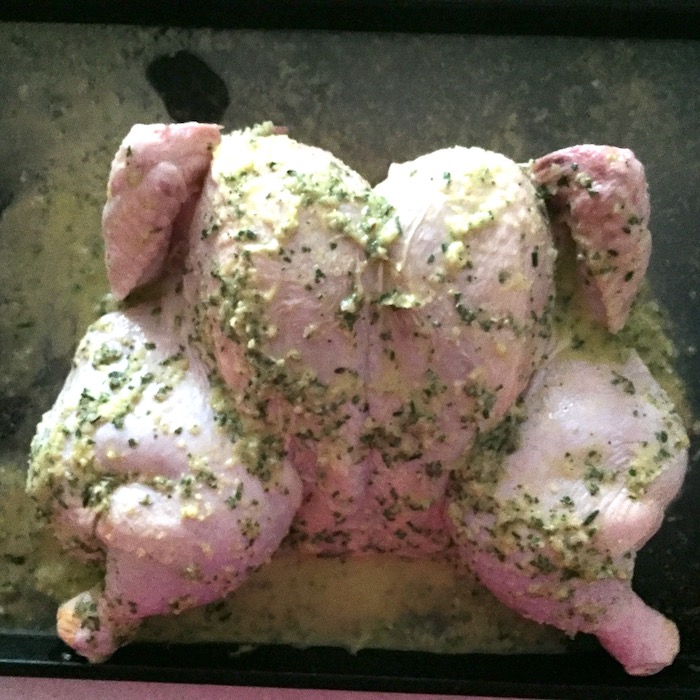 Cut the backbone out of the chicken. Squash it down to flatten it as shown. Spread the marinade over top. Cover and refrigerate for a couple of hours.

Mark Bitman, on the other hand, simply put a little olive oil, salt, pepper, and peeled garlic cloves on it right before roasting (which he did in an oven probably at 375F or 400F degrees, but he didn't say), and his turkey looked terrific. Take a look at my Easy Oven Roasted Spatchcocked Chicken. It's SO easy. 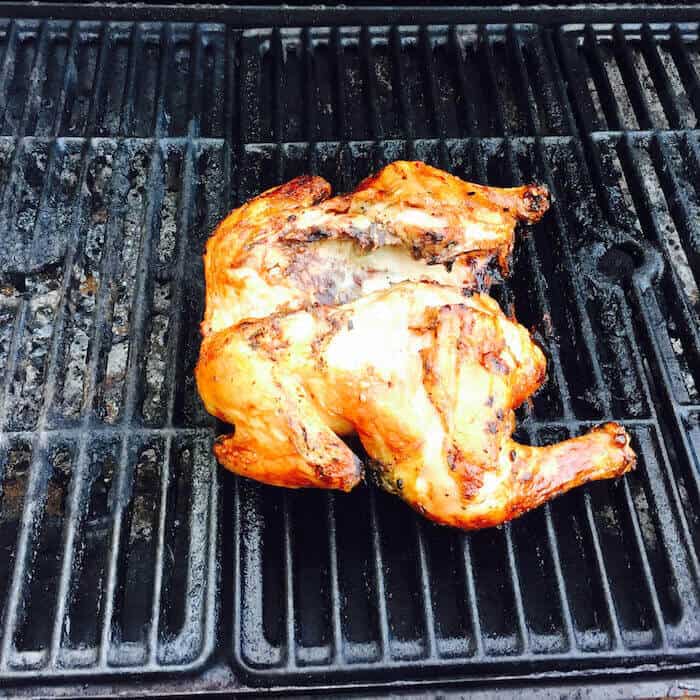 Use indirect heating to make Grilled Spatchcocked Chicken. Place the chicken breast side down at first. 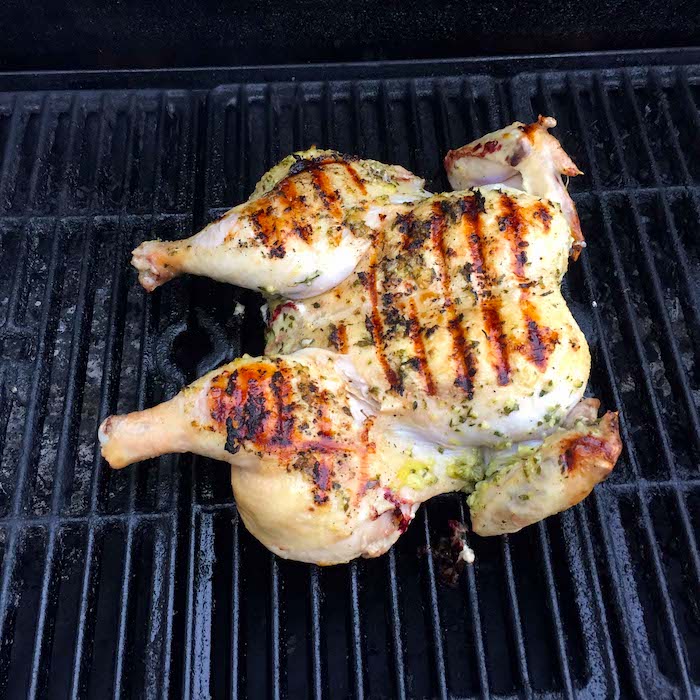 Grill the chicken on the breast for about 15-20 minutes. Then flip it over to its back.

Don and I found the flavor of the chicken to be fabulous. It was juicy and fully cooked in about 35-40 minutes a side over a medium-high heated grill using the indirect method of cooking. "Indirect" means that the area where the food is being cooked does not have flames or hot coals directly under it. The heat surrounds it on either side instead.

This Grilled Spatchcocked Chicken was so good I plan to use this method in the future every time we are cooking a whole chicken (unless, of course, I'm making soup). It's easy, quick, and delicious. It is, however, very high in fat. I think this is from the chicken skin. To test this theory, I reduced the amount of oil in the recipe and re-did the nutrition label, and the results were about the same. You can see this in the second nutrition label. If you are trying to reduce fat, I suggest you don't eat the skin!

When you try Grilled Spatchcocked Chicken, please comment on your results and share your photos on social media with the hashtag #recipeideashop.

We ate our chicken with a small Roasted Beet Salad and some Gluten Free French Bread. Yum! What would you pair it with?

Other than the grill, we didn't use any special tools. I used my kitchen shears (affiliate link) to cut the backbone out, but you can use a good sharp knife (affiliate link). I also used measuring cups and spoons, a small paring knife, my chef's knife, a cutting board, and my small food processor. And of course, our Char-Broil Gas Grill (affiliate link). What kind do you use? 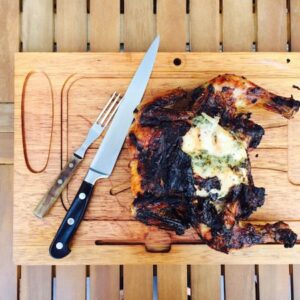 Adriana
This recipe requires refrigerating the chicken for a couple hours before grilling. Make the rub in the morning, apply it to the chicken, and refrigerate for at least 2 hours while you go about your life.
5 from 1 vote
Print Recipe Pin Recipe
Prep Time 20 mins
Cook Time 1 hr 10 mins
Total Time 4 hrs 5 mins
Course Chicken, Main Course
Cuisine American
Servings 8
Calories 360 kcal

To Spatchcock the Chicken

To Make and Apply the Rub