This cornbread stuffing recipe featuring dates, cranberries, and sausage is a tasty alternative to traditional sage stuffing. The cranberries and dates add a little sweetness, and the sausage makes it hearty.

Not too sweet, not too tart, and just delightful on the palate, this simple cornbread stuffing is a robust addition to a meal. I was delighted with the first bite.

This stuffing would also work well with a rolled and stuffed flank steak. I can't wait to try it again. If you're feeling adventurous, try other fruits or nuts for your own version of a unique stuffing recipe idea.

Most families use the traditional sage stuffing cooked inside the turkey, but I encourage you to give this cornbread dressing that's just the right mixture of savory and sweet.

See the recipe card for quantities.

Simmer the dates and cranberries in the grape juice for a couple of minutes and set aside.

Sauté the onions and celery in melted butter until soft, about 5 minutes.

Add the sausage chopped up into small chunks and cook until the sausage is browned, approximately 10 minutes.

Add the cranberry and dates mixture and stir, then mix in the rosemary and pine nuts and cook for a couple more minutes.

Mix the egg, chicken stock, and cornbread stuffing in a large bowl, then add it to the sausage mixture from the skillet and blend it all together.

Hint: Be sure to scrape all the brown bits that might have stuck to the skillet into the bowl: you don't want to miss that crunchy goodness.

If you're missing an ingredient, don't be afraid to improvise. Here are some ideas:

You need a knife, cutting board, mixing bowl, measuring cups and spoons, and a roasting pan.

We love, love, love our Le Creuset Roasting Pan. We think you will, too. If you are buying one, I suggest you buy a whole set of these pans. You won't be sorry.

Stuffing is not just for holiday dinners. Add this delicious stuffing to your monthly dinner rotation, and make it easy on yourself: mix up the stuffing, and put it into a Le Creuset roaster. Then place a chicken breast rubbed with olive oil, salt, and pepper on top of the stuffing and you got yourself a mouthwatering, yet easy dinner.

Can I make this stuffing ahead of time?

Absolutely! You can either make parts of it (like sautee the onions and celery) the day before and just assemble it the day of your feast, or, cook it completely and store it in the fridge. Then stick it in the oven or the air fryer for 30 minutes or so to crisp it up again.

What is the difference between dressing and stuffing?

Most people refer to stuffing when you stuff the mixture into your bird and then cook it together. Dressing is referred to when you cook it as a side dish, rather than inside your fowl. 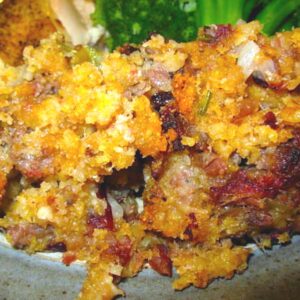 Be sure to scrape all the brown bits that might have stuck to the skillet into the bowl, so you can enjoy every bit of it.