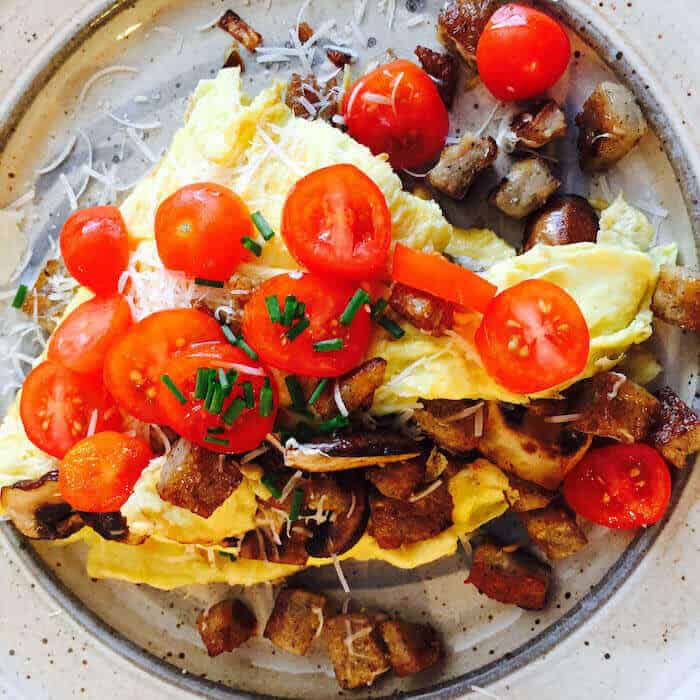 September is National Mushroom Month. Don here, with a new breakfast item, Mushroom Omelet. I'm the omelet maker in the family. And the portabella mushrooms were cooked perfectly on this one if I do say so myself.

Usually, Lois is the cook around our house, but on Saturday mornings, I take over. We both love a good omelet. I usually make one and split it between us, rather than making two small omelets.

Have you ever watched a chef make omelets in a hotel? Sometimes the hotels have breakfast stations set up so you can watch what they are doing. That's how I learned my omelet-making technique.

The chef takes a small skillet (I personally like the nonstick or the cast iron variety), adds some oil, and heats it over moderate heat. Then he cooks the veggies or items you want in your omelet. He pours those out into a small bowl when they are ready. And then he makes the egg portion of the omelet.

Again, he uses the small skillet, adds some oil, and heats it over moderate heat. Then he ladles beaten eggs into the skillet and cooks them for a bit, using a spatula to lift up the eggs periodically so they don't stick to the pan. And he tilts the pan while lifting the eggs up to let the uncooked eggs seep down around the cooked eggs to cook.

When the eggs are almost set, the chef turns the whole omelet over in the pan to finish the cooking, dumps the veggies and meat he has set aside into the omelet, and folds half the omelet over top of the veggies. Now it's time for him to remove the omelet to the waiting plate.  It's easy to simply slide the omelet off the skillet onto the plate.

Here's what I did. I chopped those baby portobellos into bite-sized pieces. Stems, caps, all of those little deliciously brown babies. In the large omelet pan, I melted a tablespoon of butter.  Then added the mushroom pieces.

While those were sizzling over medium heat I mixed four large eggs with a ¼ cup of milk and one and a half tablespoons of Herbs de Provence, a little nutmeg, some sea salt, and freshly ground pepper. Then whisked the mixture until it was frothy.

By then the portobello pieces were starting to brown. I carefully poured the egg mixture over the mushrooms.  As it cooked, I scraped the edges toward the center. When the omelet had set, I flipped it over to finish cooking.

Now I'm the first to admit my omelets are not a thing of beauty. Somewhat too brown and too thick to fold into thirds for a proper presentation. They are, if I can toot my own horn, very tasty. This omelet goes well with a couple of nicely browned sausage patties.

To garnish, I added small, sliced tomatoes and a little Pecorino Romano cheese (similar to Parmesan). 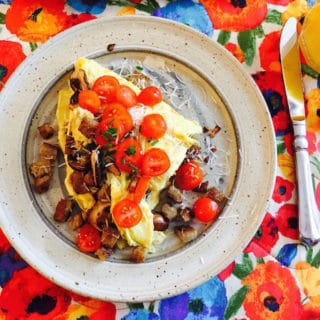 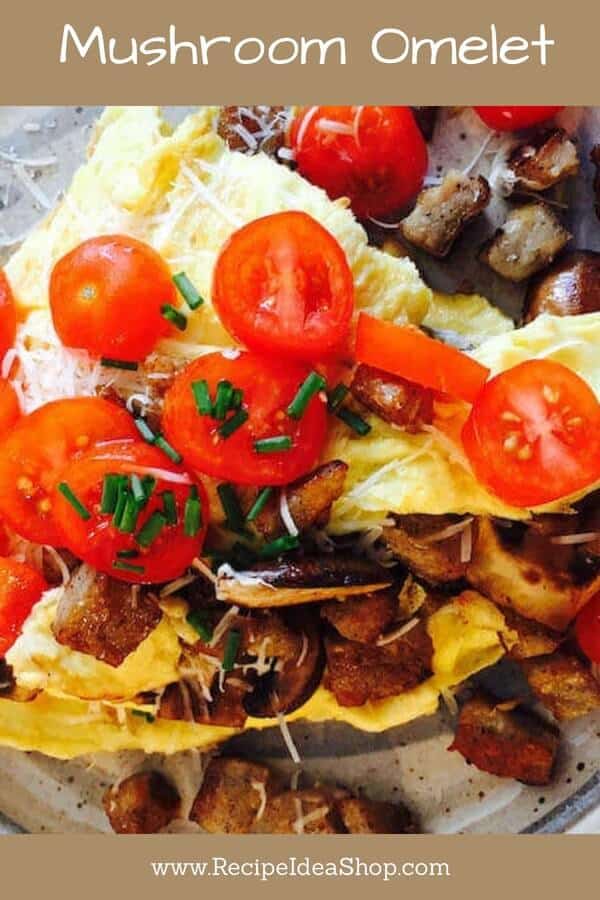 Perfectly cooked mushrooms make a huge difference in taste in this Mushroom Omelet.